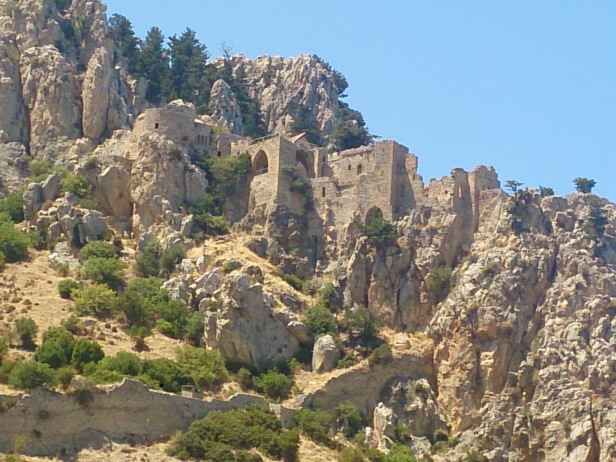 At 732m, St Hilarion is at the middle height of the three. It is, however by far the best preserved. The walls and towers appear to sprout off the rocks almost at random, giving the castle a fairy tale look. Indeed it is said to have inspired Walt Disney to use it as a design for the castle in Snow White and the Seven Dwarfs.

The castle is named after a little known hermit who fled Palestine during the 7th century to live and die up here, purging the mountain of pagan demons. It is said that  the hermit was stone deaf, so was able to resist the tempting cries of the demons who stalked the mountains with ease. The demons finally admitted defeat, and left Hilarion and the mountain in peace. A Byzantine monastery, and later a fort sprang up around his tomb

Owing to its near impregnability, St Hilarion was one of the last castles taken by the crusaders in 1191. The fortifications were improved by the Lusignans during the early 13th century, and the castle was the focus of a four year struggle with the Holy roman Emperor Frederick II for control of the island till he was defeated in 1232. Over the next 140 years, sumptuous royal apartments were added so that the castle became a summer residence. It also served as a place of escape in 1349 when the Black Death swept the island, and estimated numbers of the dead range from one quarter to one half of the entire population.

In 1373, during the Genoese invasion, the castle again became militarily important as the retreat of the under-age King Peter II. His uncle and regent, John of Antioch, mislead by his hostile sister-in-law into believing his bodyguard of Bulgarian mercenaries were treasonous, had them thrown one at a time from the highest tower of the castle. Without his protection, John, who had been implicated in the murder of Eleanor's husband, was lured to supper with Eleanor in Nicosia where he was, in turn, promptly dispatched.

When the Venetians took over in 1489, they relied on Kyrenia, Nicosia and Famagusta for the defence of the island, and they abandoned St Hilarion and her two sister castles.

Although the Venetians considered the castle obsolete, it came to prominence again in 1964, when the beleaguered Turkish Cypriots used it as the headquarters of their main enclave which included several Turkish Cypriot communities straddling the main Kyrenia Nicosia road. A small garrison of teenage activists was able to fend off EOKA attacks on the castle, and the Turkish Cypriots remained in control thereafter. The castle again played its part in 1974 when it was at the centre of a battle for control of this important pass between north and south Cyprus.

Although St Hilarion is now very much open to the public, the approach road passes through a military area, so is very occasionally closed for access.

The richest and most popular part of the castle is the elegant gallery with its two fantastic gothic windows, one with stone window seats intact. This is where queen Eleanor surveyed her kingdom, and is known as the Queen's Window. If you can manage a further climb up the uneven steps to the southern peak, you will be further rewarded with more superb views. Off the main courtyard, you will find the 14th century Prince John's tower standing on a rocky promontory. It was here that Prince John's bodyguard are reputed to have met their end.